Left of the Loop Part II: The Bone Chute

The most haunting image from the Post-Industrial Urban Apocalypse of Tim W. Brown's Left of the Loop is the bone chute located across the street from the loft. While some meat distributors and restaurant supply warehouses still remain in the neighborhood these days,  many of the large meat packing plants have now been converted into luxury lofts and tourist-destination restaurants. In the Eighties, however, the meat-packing industry was in full swing in the West Loop, making stray dismembered animal parts one of the notable features of Spungkdt & Stark's landscape.

"Perhaps the best reminder of the neighborhood's character and purpose was what Stark and I called the 'bone chute.' A fiberglass device sticking out of a wall of the packinghouse across the street, the bone chute's conveyor belt ferried the spinal columns, skulls, ribcages and pelvises of countless slaughtered cattle into the back of a dump truck parked underneath. All day long the bones, still red with flesh, would drop into the truck; with each thud, the truck bed echoed through Sangamon Street like an over-sized bass drum. Then, promptly at three, the truck would pull out, empty its bones somewhere, and return for the next day's load. Although curious, we never found out where the bones were shipped."

Sounds like something out of And the Ass Saw the Angel. Brown was even able to dig up and scan a picture for us, circa 1985. "Notice in the background," says Brown, "that the Bloomingdale's/900 N. Michigan building near the John Hancock Center has yet to be built." 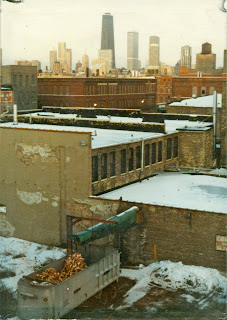 In the chapter Hog Butcher to the World, Brown describes looking out the window one day to discover "two flesh colored lumps on the sidewalk across the street." Closer inspection reveals the lumps to be two bloodless, severed pigs' heads, eyes "thankfully" closed... Stark pronounces them "the coolest thing I've ever seen on Sangamon" and decides the best thing to do with them is to let them decay slowly, and watch the progress. One eventually becomes "a black circle staining the concrete sort of like an oil spot;" the other, spray painted red-and-black-speckled by a visiting friend, remains unchanged for months until disappearing completely one day, never to be seen again.

Coming up: the urban frontier and even more fascinating, "the human capacity for reinvention."

Tim W Brown lives in the Bronx. His fourth novel, Second Acts, will be published by Gival Press in October 2010.